Before I go into detail about my dusting of Brad from our little 70.3 bet this past weekend, I must, MUST announce how much I spent to fly my Specialized Transition from San Diego to New Orleans on Continental Airlines (which has a $100 bike fee each way): $50. Total. That was the extra baggage fee.

How’d I do this? Chance Regina from Blue Competiton Cycles showed me a bike case that one of their company brands, Aerus, sells: a soft-sided bike case—no fancy name, just their bike case. It doesn’t have caster wheels or a hard base, or a fork block. But if you can see past that simplicity (which is what makes this an airline charge-avoider), it has lots of padding to protect the frame, padded pockets for the wheels and skewers, and a padded shoulder strap. Without all the other reinforcement plastic and rivets, it makes the bike and case light—on the airline scale, my bike weighed in at 31 lbs, in the case. Add to that its small size and the fact that there were no bike-related logos on it, and the gate agents had no reason to suspect it was a bike. 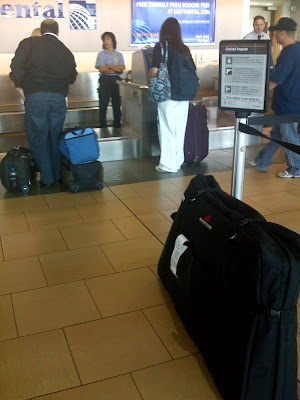 Only things you might need after the fact? Maybe some pipe insulation for your tubesets, and brace blocks for your fork and rear dropout (so a heavy drop on your case by the luggage throwers doesn’t break your fork or rear stays), and that’s about it it. There's no room to pack extra shoes or helmet, but this is meant to hopefully skirt the airline folks—the more you want to load it down, the more it raises red flags.

Of course, they ask what it is, and here’s where you have to be clever, and state what it isn't. I have two things that two people suggested to me, each of which worked like a charm, neither of which I will share with you because, well, it's like a kid's favorite hiding place; once you tell someone, and they tell 10 of their friends, and they tell 10 of theirs, it's not much of a hiding place anymore, is it? If you're clever, you will think up what your excuse is.

Heading out of San Diego, I had to take a pic of the thing, sitting there, pleased that I had not been worked for yet another c-note on a flight.

Chance, thanks for the chance to test this case—it works like a charm. If you travel a lot, the TriAll3 is awesome and bombproof. But with costs as they are, a softside is worth checking out. And at just $265 for the case… how can you lose?

Well yeah, of course, the airlines can always lose your bike.

More soon on how the Brad vs. Jay battle went. And the sordid details on how Canuck Brent McMahon parties on Bourbon Street after winning his first 70.3. Hint: it involves Hurricanes mixed with Rum and Cokes at Pat O'Briens as he partied with his LifeSport posse. As a journalist, I was simply an observant, a proverbial fly-on-the-wall. A fly that Brent kept feeding Hurricanes and beers.
Posted by Jay Prasuhn at 12:38 AM

glad the bag worked well. I didnt want you to hve any excuses from a bike stand point when it came to the Beer Brawl between you and Culp. I will tell you this, i have traveled the world with bikes in hard and soft and never had an issue with damage on a soft case...probably just jinxed myself. Plus Tina Pic (our bike PMs wife and multi time national champion travels with this bag weekly and has for 4 years and never had a bike damaged.

Glad you had a great race...and an even better post race...my money says NO is the new spring break destination for Tri folks.

I have have linked this article from my site HumblePower for the past year and the response has been great. I sell the Aerus Biospeed for $252 w/free shipping. This Case outsells the Thule Roundtrip by a factor of 5. Thanks for your review!